Difference between revisions of "Toyota U140 transmission"

From zmatt.net
Jump to: navigation, search

Here is a schematic of the U140 automatic transmission used in the RAV4 (not including the torque converter on the front end, or the transfer case and differentials on the rear end): 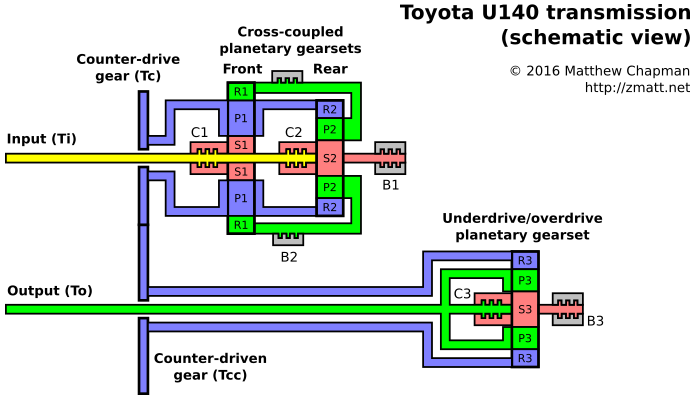 This is rather daunting at first glance, and I don't recommend trying to understand it before your morning coffee, but after staring at it for a while it does start to make sense.

There are three planetary gearsets, two of which are used to generate the main gear ratios and the third used for overdrive. Each planetary gearset consists of a sun gear (labelled S in the above diagram), a planet carrier and set of planet gears (P), and a ring gear (R). If you have never worked with planetary gears before, it is worth having a look at this video that explains the principles of an automatic transmission, and this page which has some great pictures and information about planetary gears; I found both of these resources very helpful.

Unlike in a manual transmission, all of the gears in an automatic transmission are permanently meshed together regardless of what gear the vehicle is in. Instead of moving the gears, gear ratios are selected by choosing which gears to actively drive (using clutches) and which to hold stopped (using brakes). In the above transmission there are three clutches (C1, C2, C3) and three brakes (B1, B2, B3). Engaging C1 connects the input shaft to the front sun gear. Engaging C2 connects the input shaft to the rear sun gear. Engaging B1 stops the rear sun gear (therefore, it is true to assume that B1 and C2 are never engaged at the same time). B2 stops the front ring gear. B3 stops the underdrive sun gear, and C3 gangs it together with the planetary carrier of the same system.

The different gears are then achieved as follows:

How this works is not at all obvious, and I'll work through how the gear ratios are achieved in the following sections. For more detail on how the physical parts fit together, refer to a service manual.

Planetary gear systems seem very complicated until you realise that you can determine the rotation speeds from one simple algebraic equation:

Here is the data for the planetary gear systems in the U140 transmission: (source: [2])

The one other piece of information we'll need is the ratio of the counter-drive gears:

Now let's take a look at how all the gears are obtained from the three planetary gear systems.

In these high gears, clutches C1 and C2 are both engaged, so the sun gears of the front and rear gear systems are both driven at the input speed ([math]T_i[/math]). Since the planet carrier of the front system is connected to the ring of the rear system, and vice versa, it might be intuitive that the only sensible solution is for everything to rotate at the same speed (if either gearset were to produce a gear ratio greater than 1:1, one would expect the other to also do so by symmetry, but the cross-coupling requires the ratios must be the reciprocal of each other).

Let's work through the equations to prove that's the case:

After what seems like an excessive amount of algebra to get to a simple answer, we've proven that the counter-driving gear is spinning at exactly the same rate at the input (1:1); this is called direct drive. This is why clutch C2 is also called the direct drive clutch.

The only difference between 3rd and 4th gear is in the operation mode of the underdrive/overdrive gear set.

In 4th gear, clutch C3 is engaged and locks the sun gear to the planetary carrier which is connected to the output. A characteristic of planetary gear systems is that if any two components are locked together, the third must have the same speed. We can go through the algebra to prove this, which turns out to be much simpler than last time:

Indeed in fourth gear all three planetary gear systems are in direct drive (1:1), with only the small reduction factor due to the larger number of teeth on the counter-driven gear.

Gear ratios are traditionally given with the output on the denominator, so the gear ratio for 4th gear is quoted in the manual as the reciprocal of this:

In 3rd gear, brake B3 is engaged and the sun gear is stationary. Then:

As usual the counter-driven gear and underdrive scale this by 0.709:

You can verify against Wikipedia that we've calculated all the gear ratios correctly.

In neutral and park, no clutches are engaged except for B3. Since neither C1 or C2 are engaged, the input shaft from the engine spins freely, and the wheels drive the rest of the transmission as if it were in third gear. In park, a parking lock pawl is engaged that locks the underdrive planetary carrier to stop it rotating.

(Presumably, B3 is released when the engine stops and the transmission loses oil pressure. However, the underdrive planetary carrier is now held by the parking pawl.)

There are also two one-way clutches in the U140 transmission that I haven't described above: one operates alongside B2 and the other alongside B3, allowing rotation in one direction but not the other. I believe these are used to smooth out gear changes as follows, although do let me know if I am wrong, I could find very little information about them.

Consider the gear change from 1st to 2nd (or indeed 2nd to 1st). Changing from 1st to 2nd requires releasing brake B2 (the front ring gear) and engaging brake B1 (the rear sun gear). The problem is the timing of this change. If the engagement of B1 comes first, even by milliseconds, the transmission will start jerking to a stop. If the release of B2 comes first, the planetary gear system becomes under-constrained, and the power of the engine starts being transferred into rotating this front ring gear backwards (since it's easy to turn) rather than driving the output (which is harder to turn). The solution is to use a one-way clutch alongside B2. This one-way clutch stops the ring gear rotating backwards when B2 is released, while allowing it to rotate forwards when B1 is then applied.

The gear change from 2nd to 3rd requires changing from B1 to C2. I believe the same problem would occur that, when B1 is released, engine power starts being transferred into slowing down the front ring and driving the rear sun backwards. However, there does not seem to be any special one-way clutch alongside B1 to prevent the rear sun going backwards; perhaps B1-C2 can be done quickly enough that it is not a problem in practice, or there is some other trick used for this change.

The gear change from 3rd to 4th requires changing from B3 to C3. Again, after releasing B3, the underdrive gear system becomes under-constrained, and power will tend to flow into rotating the sun gear backwards rather than into turning the planetary carrier (output) forwards. Here there is indeed a one-way clutch on the underdrive sun gear alongside B3 that will stop this from happening.

There are two variants of the U140: the U140F is used on AWD models and includes a transfer case in the transaxle assembly, while the U140E is used on 2WD vehicles and does not. Otherwise both share the same transmission components described above.